“The most Beautiful Campus of Hungary!”

The new wing of the Medical School of the University of Pécs, for which the Modern Cities Programme provided 14 billion HUF resources, was officially handed over. The ceremony took place on 5 September.

The main building of the prestigious Medical School of Pécs has been expanded with a new 12,000 m2 wing, which includes the latest technological innovations, thus providing students and educators and researchers with an even higher level of theoretical and clinical education environment than before. 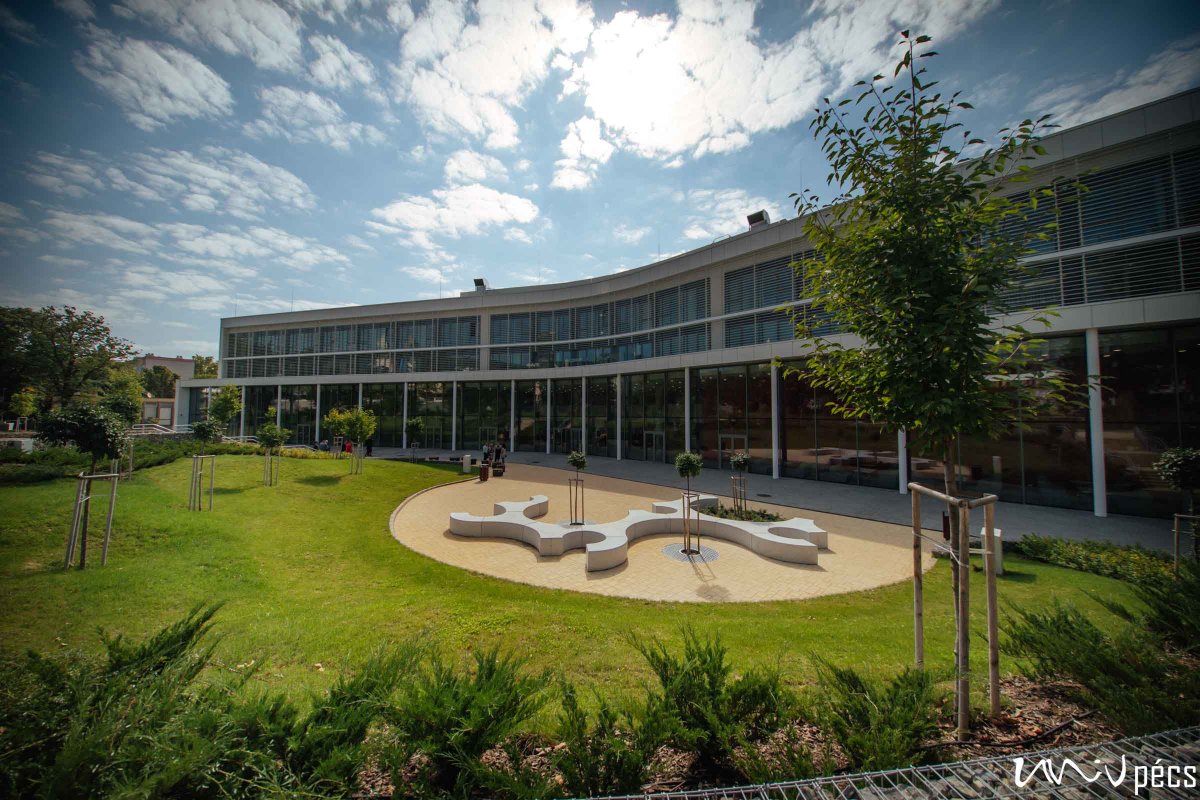 As part of the Modern Cities Programme, the Government of Hungary supported the University of Pécs with more than 30 billion HUF, the declared aim of which was to strengthen the competitiveness of the institution, to develop the education and services portfolio, to increase the number of international students and to provide the necessary infrastructure conditions. The Medical School of the university played a significant role in the achievement of the goals, since nearly every other student of the university's slightly more than 5,000 international students are studying at this faculty.

We made sure that the nearly 30 billion HUF, that we received through the Modern Cities Programme, was used wisely, but it was not easy.

– said Attila Miseta, rector of the University of Pécs, thanking everyone involved in the process. 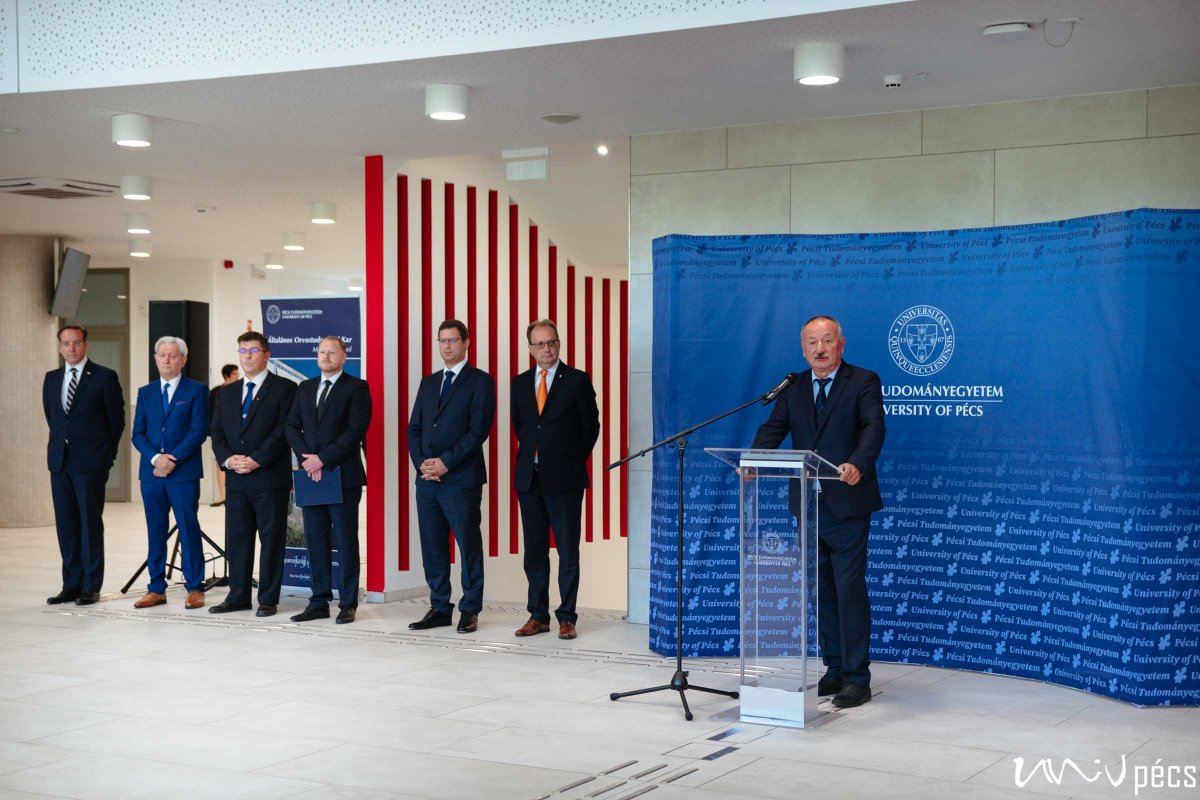 "During the tour you will see this beautiful campus, which fits every requirement of the 21st century. I am very proud, but we still have a lot of work to do, new projects, for some of which the funding has already been allocated to the university." He also mentioned the university recently introduced new operating model, in which he considers using the opportunities to be the most important.

The upcoming centenary celebration of UP was highlighted by Gergely Gulyás, Minister heading the Prime Minister's Office, who compared the development of Pécs through the Modern Cities Programme to the rebuilding of the country in the 1920s. With the university moving from Bratislava to Pécs, the re-establishment was successful. 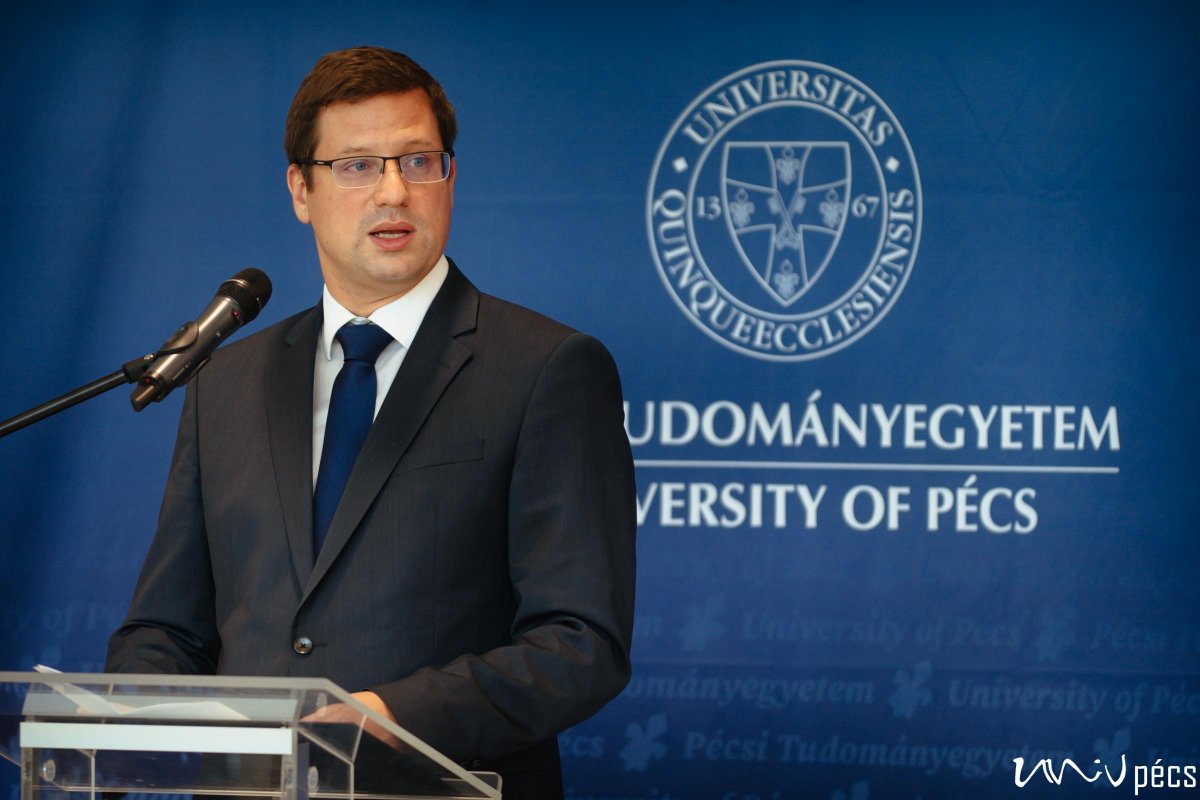 Gergely Gulyás, on behalf of the Government of Hungary, thanked the University of Pécs for its work concerning the coronavirus epidemic and specifically highlighted the role of more than 2,000 students of UP, who fought the epidemic while at the same time continuing their studies. Archimedes thought that a fixed point and a long enough lever are enough to move the world. The University of Pécs is the South Transdanubian centre of science and innovation. According to Gergely Gulyás:

The University of Pécs is one of the fixed points that can help the region move forward.

He also stated that today is not the end of the process, but the beginning, which will contribute to the success of Pécs and the region.

“Thanks to the economic recovery that has taken place over the last six years, huge strides have been made, and today is a milestone, but it is also the first step on a new path” – said Péter Hoppál, Member of Parliament, referring to the fact that the dental block is already being built next door to the new block. "On this program, the whole region will win." - emphasized the representative.

István Decsi, Chancellor of UP and member of the Board of Trustees of the Universitas Quinqueecclesiensis Foundation, stated that the motto of the Modern Cities Programme, which was launched in 2015, has been implemented:

UP has truly become the gateway to the future.

In his speech, he also discussed the possibility of a new form of operation, since the change of model will also contribute to the beginning of a new chapter in the life of the university. 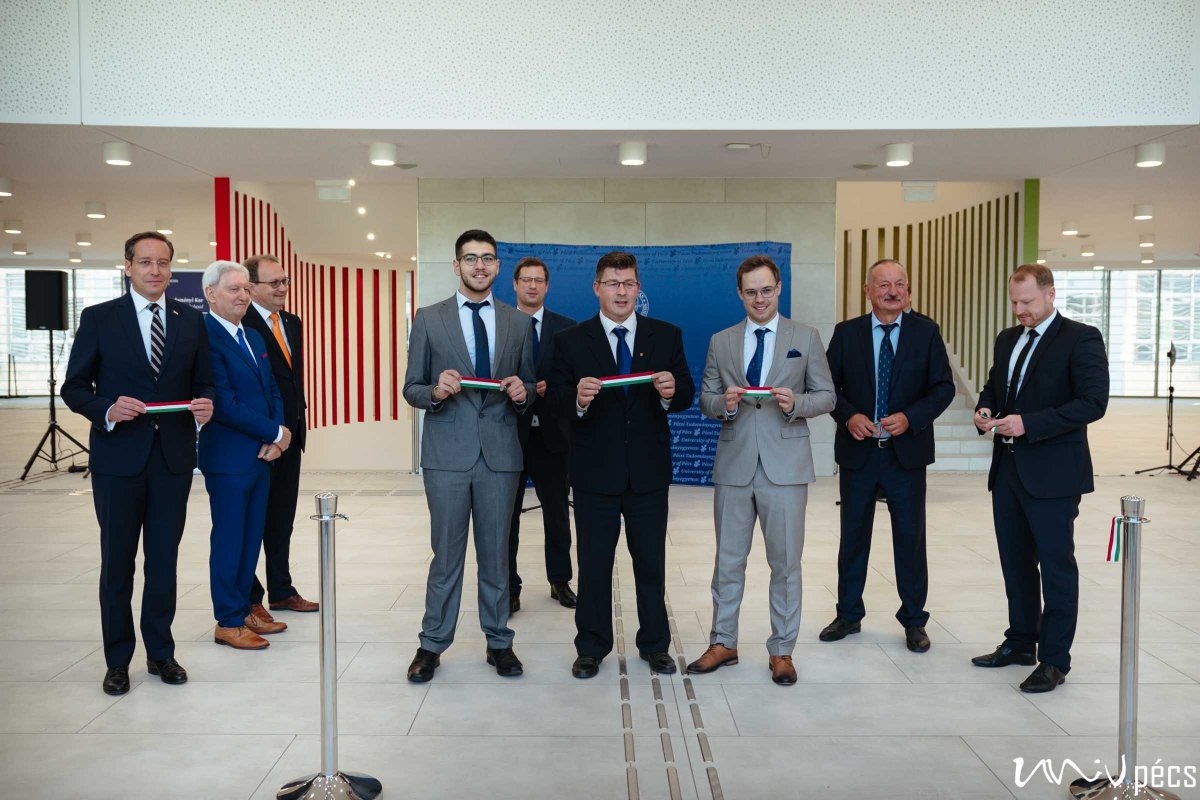 After the ceremonial cutting of the ribbon, Professor Miklós Nyitrai, dean of the Medical School, gave a speech. "I might be accused of being partial, however,

I am convinced that we are on Hungary’s most beautiful campus.

He thanked everyone for their help and emphasized: "Our goal is to further develop this community." 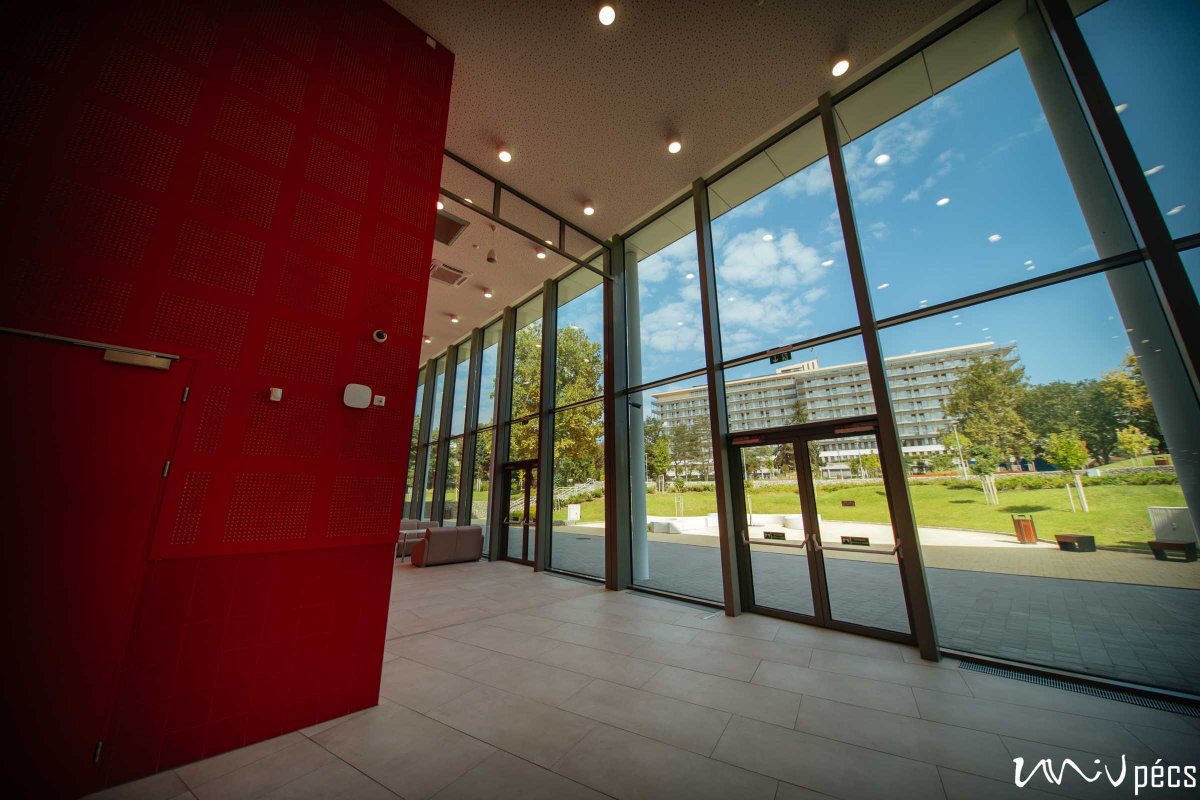 Imre Sillye, chief engineer, led the tour of the new building, which is divided into three main sections in

red-white-green - the colours of the Hungarian flag.

Modern, hybrid education-friendly lecture halls and well-equipped labs await medical students in the buildings. Thanks to the development, the faculty's spaces for education and research have been expanded by 40%. In the new wing, 4 lecture halls and 34 seminar rooms serve the educational and learning conditions, and the state-of-the-art medical technology provides the background for the training. 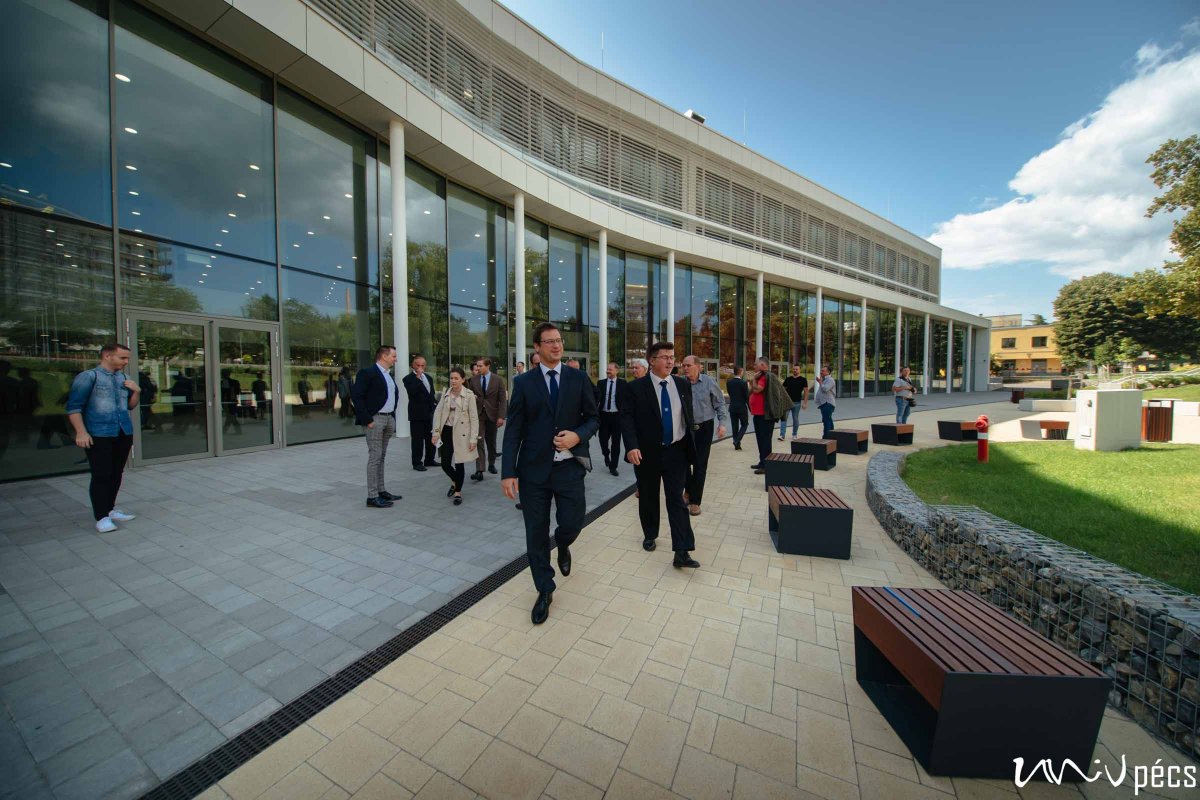 Four institutes are moving from the old theoretical block to the new wing. Globally, the concept is not new, yet the so-called "open lab" architecture on every level is considered a novelty in terms of the function of building design. In addition, the 10,000 m2 park has been renewed around the wing, which, with its plants, state-of-the-art pavement system and public furniture and artificial lake, provides a wonderful community space for students. The good news for educators and researchers in particular is that 254 new parking spaces have been created to alleviate parking difficulties. Many of the students ride bicycles in the city, it is no coincidence that 160 new bicycle storage places have also been created. 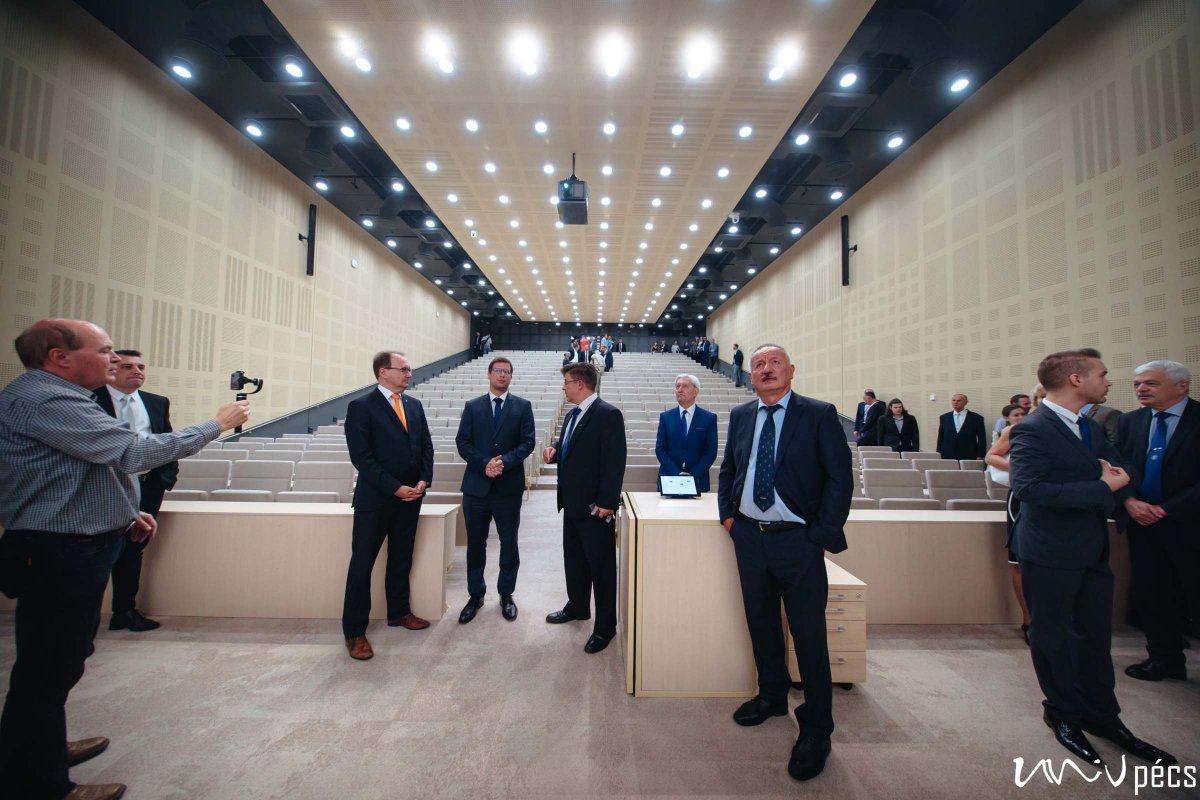 The history of the medical campus in Pécs began in the 1950s, when education began at the former Military School. In the 1980s, the English language medical training was launched, in 2004, the German-language dentistry, in 2006, the English-language dentistry, and in 2009, the English-language pharmacy training appeared in the university's portfolio. It is a fact that the number of international students has increased significantly in the last decade, and the international trend shows that

the need for Hungarian medical training may continue to grow in the coming years. 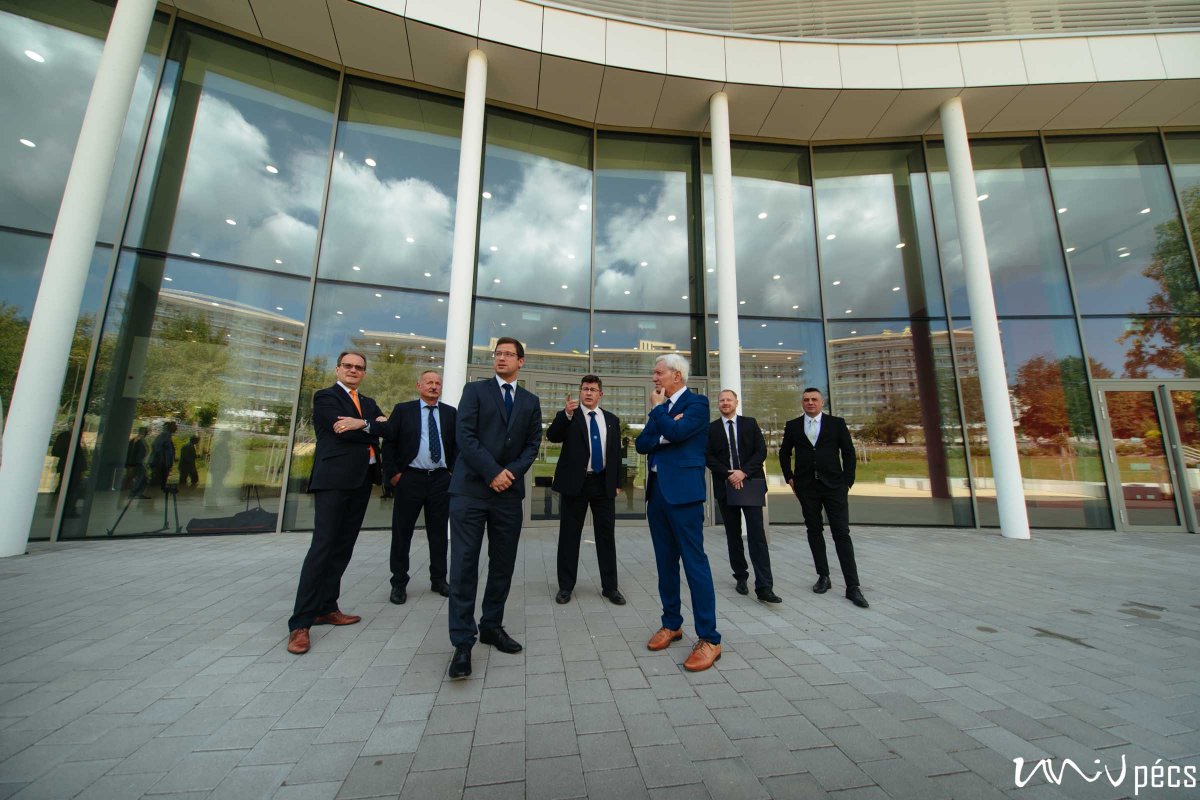